Reflect on a decade in the lives of pitbulls and Friends to the Forlorn, and hear from the next generation on the future for pitbulls and what it means to be part of the Forlorn Family. Come together with us to stand for pitbulls and other animals who are euthanized each year in animal control facilities nationally, and learn about FTTF’s vision for our next phase of helping pitbulls, other animals, and people in need. We have done a lot – but WE CAN DO MORE!

Refreshments will be available for purchase. Check-in and Candle sales open at 5:00 PM.

TICKETS ARE SOLD OUT!
We can’t wait to celebrate with everyone on Saturday night!
Even if you missed out on getting tickets to the party, you can still join us for our 7th Annual Pitbull Awareness Candlelight Vigil at The Strand at 6:00p before the party. Vigil admission is free, so come on out and bring your friends!

Join us to celebrate ten years of saving lives, community outreach, spay & neuter, and finding loving, forever homes for hundreds of Forlorn dogs! Ten years is a proud accomplishment for any nonprofit organization, but an amazing feat for a breed-specific, especially a pitbull-specific, rescue organization. We cannot wait to spend a night enjoying this milestone with our friends and Forlorn Family members. It will be a night you won’t forget!

EVENT PARKING INFO
Free parking is available around Marietta Square, but can be difficult to find during busy times. If free parking is not available, the best option for paid public parking is in the parking deck across from The Strand on Cherokee Street.

Join us for the 7th Annual Pitbull Awareness Light for the Lost Candlelight Vigil and our 10-Year Anniversary Party on Saturday, November 2, 2019. 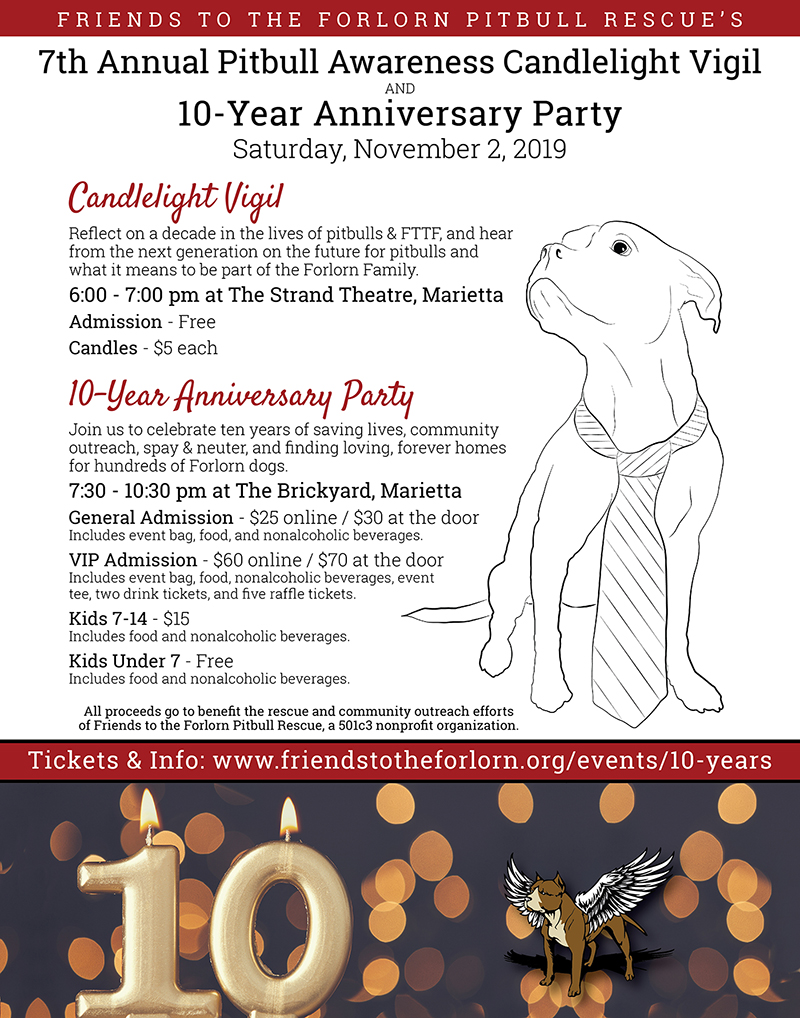 Why is the 10-Year Anniversary so special?
Friends to the Forlorn will be celebrating its ten-year anniversary in October 2019. That means ten years of saving lives, community outreach, spay & neuter, and placing hundreds of Forlorn dogs into loving, forever homes. It is not an easy feat for any non-profit or animal rescue organization to reach this ten-year milestone; it’s even more uncommon for a breed-specific, and pitbull-specific, rescue. However, we are proud to say after ten years FTTF is not just existing, we are thriving, growing, and planning for the next ten years!

We are excited to share this amazing accomplishment with our Forlorn Family: the friends, volunteers, fosters, adopters, supporters, team members, and partner organizations who have helped us get here! With so much to celebrate, and so much to look forward to in the near future, our 10-Year Anniversary Party on November 2 at The Brickyard in Marietta will be an unforgettable night of great music, delicious food & drinks, entertainment, and FUN!

How big is the actual pitbull overpopulation problem? Why are pitbulls not making it out of shelters? What can people do to help solve this overwhelming silent crisis among our favorite breed?

From that one idea, the Forlorn Family sprang into action. How can we represent the large number of pitbulls euthanized in animal control facilities nationwide while also celebrating those we have been able to save? From reflection on that question, the Vigil was born!

The Vigil is an opportunity to celebrate the dogs FTTF has rescued, but also a chance for us to take a moment and recognize the pitbull overpopulation problem and honor the pitbulls and other animals euthanized in animal control facilities every day. Each year, the Vigil has grown in size and scope. We have seen the word for this event spread like wildfire among the rescue, pitbull and animal lover communities. Friends to the Forlorn will continue to spread the word and educate the community on the seriousness of the situation we face and how we can all can be part of the solution.

Who is Friends to the Forlorn Pitbull Rescue?
In 2009, Friends to the Forlorn Pitbull Rescue was founded by a single man, Jason Flatt, who wanted to save the dogs that no one wanted. He built his rescue on integrity, compassion, commitment, and love. By using these founding principals, Jason and his team of dedicated volunteers, fosters, and supporters – known as The Forlorn Family – grew FTTF into the largest and most well-respected pitbull rescue in Georgia.

Friends to the Forlorn believes in: Transparent & responsible rescue practices, community involvement,
breed & ownership education, spay & neuter, and responsible pet ownership. Since our inception in 2009, we have successfully rescued and found loving, forever homes for over 640 dogs. We also have spayed/neutered over 6,000 pets at no cost to the community. We will continue our work within the community because the lives of our dogs, and the lives of all dogs, depend on it.

THANK YOU TO OUR SPONSORS