Until about 9 years ago, I was indifferent to “pitbulls”. That all changed when I met Jason Flatt. At that time, Jason recently founded Friends to the Forlorn and was bringing his newly-rescued dogs to the vet office where I worked. Many dogs came in, but the one who really touched my heart was Quinn. 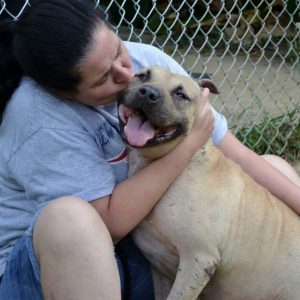 Quinn was a true “fighting dog”. Highly dog aggressive and shut down to the world, he would cower in his kennel at the vet hospital where he was in boarding. The slightest noise, touch, or tennis ball was just too much for Quinn to handle. After months of building trust, he began to emerge from his shell. He and I would become the best of friends. We would frequently go for walks or hang out in the yard at the Pitbull Palace, where he later went to live. Those tennis balls, that just months before were too scary, became one of his favorite toys. He even gradually began to make a doggie friend: his roommate, Gerrie. This highly dog aggressive, terrified fighting dog was transforming before my very eyes.

I was brought to tears the day I witnessed Quinn interact with another dog outside of his kennel. I was walking him and began to step aside as Jason was walking nearby with Gerrie. Jason called out, “No, stay. Watch this!” Worried but intrigued, I watched as Gerrie, this petite little pittie girl, not only walked straight up to Quinn…but play pounced to him. No aggression from Quinn, just a tail wag and a smile.

To be a part of his transformation was amazing and eye opening. Unfortunately, Quinn passed a few years ago after fighting a hard fight against babesia (a tick-borne infection common in fighting dogs). I was given the honor of giving him in death what I couldn’t in life – a forever home. He remains with us along with all of our other pets who have passed. 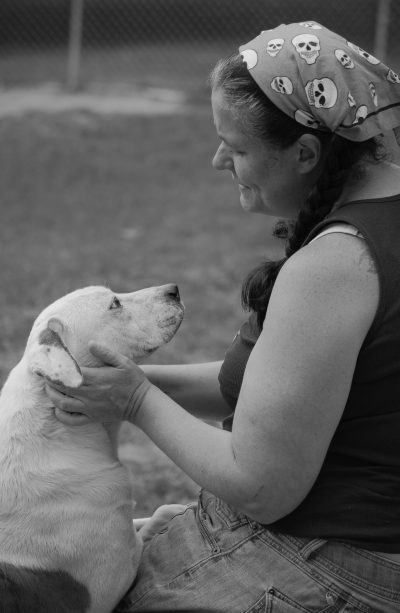 Pam at the Pitbull Palace with Adopt-a-Bull Stella

While I was falling in love with Quinn, along came a small, mangy, stinky, smiley girl. She lived in the kennel next to Quinn at the vet hospital. We named her Charlie Girl. I instantly fell in love. The timing was not right for us to take her, but oh how I wanted her. The mange cleared and she was adopted, but a few months later I got a call from Jason. Charlie Girl was coming back to FTTF and had nowhere to go. The circumstances had changed at home and my husband, Tony, reluctantly agreed to foster her. He proceeded to sleep with one eye open as she slept next to his head that first night. He had fallen victim to the media hype and was petrified of her.

It didn’t take long for Tony to realize the media had not been telling the truth and, just a few days later, it was him who said she wasn’t ever leaving our house. She fit and she was home. To this day, Charlie Girl continues to be an amazing, sweet, loving girl who goes everywhere with us. She became our first pitbull foster fail.

It was a few years before we decided to foster again. I spent a good bit of time with the Forlorn Family and all of the dogs who would come and go through the rescue. As my involvement with FTTF progressed, Tony admittedly wanted to join me. We soon discovered we both shared a passion for these dogs and for fostering.

Titan was our second foster and the beginning of the “Cardoso Zoo” (our loving nickname for our ever growing pack). A sickly pup from a bad cruelty case, he joined us in 2013. It was hard letting him go; a mixture of both happiness and sadness. The array of emotion we experienced was so worth watching a pup get his forever home.

A couple more came and went. Enter a shy 8-week-old pup named Austin. While awaiting a forever home, Tony and Austin developed a strong bond. After a couple of failed attempts at a forever home, we discovered the failures occurred because he has already found his forever home: ours. And, just like Charlie Girl had years before, he fit. Foster fail number two had officially joined the “Cardoso Zoo”. A few more years and a few more pups came and went; each with different personalities and different needs. Each made their own impact on our hearts. Everything was going well with our fostering adventure. Little did we know what was coming next.

About two and a half years ago, two more fosters joined the group: Mio, an 11-week-old “bite dog”, and Fe, a broken 8-month-old pup. We had no intention of keeping these guys as they didn’t get along with our crew. We felt they deserved more due to the crate-and-rotate routine we had to adhere to. We won’t even mention the fact Fe and I had a love/hate relationship. Over the course of their tenure at the “Cardoso Zoo”, Mio and Fe developed a very strong bond. I became Fe’s “person” and both Tony and I fell head over heels for Mio’s goofiness. We developed a system that worked and all pups were happy and content. We made the decision, a couple months ago, that Mio and Fe were home as well. So, they became FTTF foster fails three AND four. Currently, the Zoo is complete, but we know sometime in the future there will be another in need who will join the loving chaos that is the Cardoso Zoo. 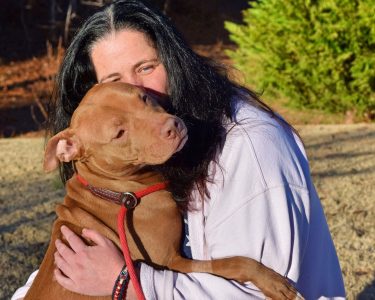 Each and every one of the foster dogs who have come to our home have taught us something. Yes, it was hard to let Titan, Brock, Cid, Ortiz, Harry, Track, Cheeto, Draco, TJ, Komodo, Merle, “Voodoo”, Watson, and Whitey go. Without a doubt. Yet, to watch them happy and loved in their respective forever homes is amazing. I am so thankful for a husband who shares my passion, the friends and family we have gained through Friends to the Forlorn, and the four dogs – Charlie, Austin, Fe, and Mio – who now complete our home, and our family. At the end of the day, I’m not sure who gets more out of it: us or the dogs.

It has and continues to be an amazing ride with FTTF, watching it grow into what it is today. I’m proud to be a part of the Forlorn Family. Not only do we raise awareness and find home for some amazing creatures, but we are an invaluable asset to the local community.

How long have you been volunteering with FTTF?
3 years

Were you involved in animal rescue prior to volunteering with FTTF?
No

What made you decide to volunteer with FTTF?
Respect for the organization, its mission, and positive reputation within the rescue community. It was recommended by other long-time rescuers.

What are your primary FTTF volunteer roles? Do you have any favorite tasks?
I’m primarily foster & chief greeter at adoptions 🙂 My favorite is “raffle ticket rep” at Bingo: I make sure everyone KNOWS it’s in them to WIN!

What do you enjoy about volunteering with FTTF?
Surrounded by a team that is just as passionate about advocacy & pitbull rescue as I am. It’s a family.

What would you tell someone looking for a place to volunteer who is considering FTTF?
Your time, money, sweat equity will pay dividends in every part of your life!

Do you have any favorite volunteer stories or events you would like to share?
Visually seeing & feeling the community support of our mission at Candlelight Vigil is a visceral reminder you are part of something bigger, and that it makes a difference.

How has being an FTTF volunteer made an impact on your life?
My husband & I share in this experience…our friends, family, coworkers all know and support our involvement. Your involvement isn’t just you, it’s your entire tribe…that impact grows with every new volunteer.

Interested in becoming part of the Forlorn Family?
Visit our Volunteer page for more information!