For Mike, his love for pitbulls started long ago and grew with him over the years. In 2007, Mike’s house was feeling empty and quiet. He adopted a handsome guy, Beau, who would have been overlooked. Beau proved to be the boost Mike needed.

A couple of years after Mike fell in love with Beau, he fell in love with me. Early on, Mike educated me about what it means to love pitbulls. At the time, I was mom to a 11-year-old Westie named Madeline. Within months we were married and blending our families. We did everything by the book with introductions, feeding separately, walking together, and so on. Beau and Madeline must have known what was going on and were rooting for us because they immediately loved each other and made the transition easy. For the next few years, the love in the household grew. As a family, we went on short road trips to the mountains, spent days at the lake, and went on “adventure walks” through the Kennesaw Mountain Battlefield trails. There was so much doggie love. So much so that we knew we wanted to add a third dog to the family. We were up for the challenge. And we knew we wanted it to be a pitbull.

The pitbull gods must have heard we were asking for a challenge because right on time, we were introduced to a rambunctious little girl who needed a home. We brought the new little sister home and named her Sorella (Sorella means “sister” in Italian.) Beau and Madeline immediately welcomed their little Sorella into their home and loved her to bits. Her puppy antics brought out the playfulness in them again. Eventually, though, Beau’s face was getting greyer and Madeline’s eyesight was deteriorating. We knew that our time with them was limited. By this time, Beau was around 11 years old, and Madeline was 16 years old. They had seen it all, and, as it goes, both eventually developed cancer. In their own time and in their own way, each dog let us know that it was time for them to leave this life and go to rest. So, as sad as it was each time, we had to let Beau and Madeline go, one right after the other, just 6 weeks apart. Now, we lovingly refer to them as the “OG’s”.

Don’t worry, Sorella didn’t let anyone stay sad for long. She suddenly became the center of all our attention and the receiver of all our affection. She went with us everywhere, and everywhere she went people loved her and told her she’s pretty. She was well-trained, well-behaved, and just too easy. Sorella proved that she was ready for a house-mate, and, lucky for her, we were up for the challenge. Mike was already following Jason and FTTF, and one day a cute blue boy with floppy ears and puppy dog eyes named Parker grabbed his attention. Again, the pitbull gods must have heard us say we were up for a challenge. 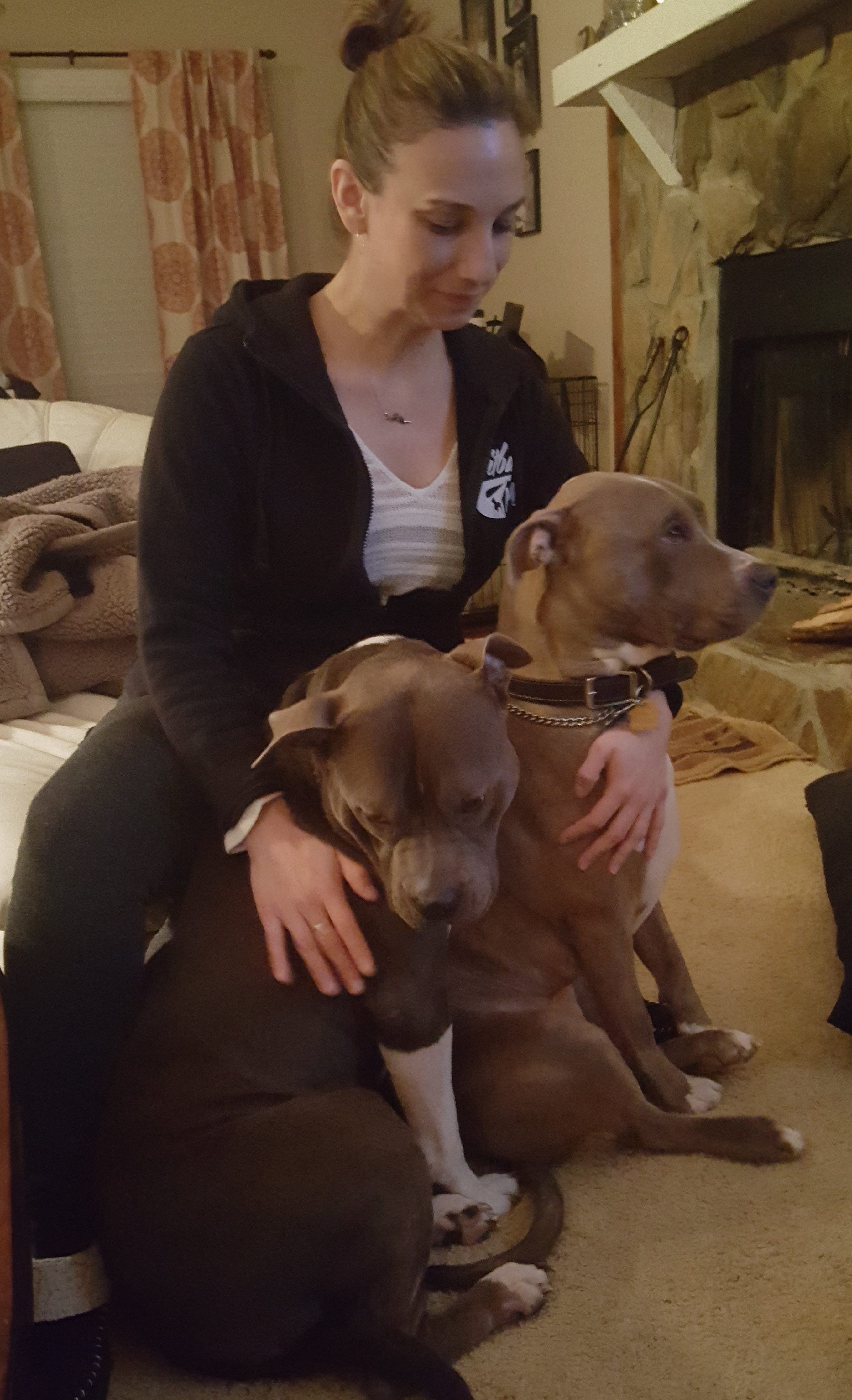 It was in November 2016 Parker first came to our house. The connection was instant, with us and with his potential new sister. Mike walked him (along with Sorella and Iris), and Sorella and Parker played like crazy dogs in the backyard all day. Once again, we instantly fell in love with this pitbull. Parker’s foster parents felt a little sad to see him go. And, honestly, they were a little surprised that Parker had taken to his new family so quickly because, as we soon found out, Parker is a unique kind of guy with peculiar challenges. The next several months were dedicated to integrating Parker more fully into our home. Let’s just say that Parker provided us the opportunity to learn how much we are willing to do to love ALL pitbulls, even the tough ones. We fed him by hand for the first six months. We learned that, generally, he is introverted and does not like meeting new people. And we learned that he will do just about anything for a carrot stick. He is a handful to say the least, but he loves to snuggle with his sister, lay at my feet while I work at my desk, and greet Mike after a long day at work with a wiggly butt. And, together, Parker and Sorella alert the household to every delivery at the front door and every squirrel in the backyard. From the very beginning and still today, Sorella and Parker love each other just like how Beau and Madeline had loved each other.

At the end of May 2018, we noticed a cute little boy who was at Fulton County Animal Services and was on the euthanasia list for the third time. The staff was advocating for him to find a home. They said he was a “rockstar” who got along well with the other dogs, and they desperately wanted to see this sweetheart have another chance at life. So, Mike and Jason headed down to Atlanta for this forlorn pitbull’s Freedom Ride. We named him “Chiron” after a comet that travels around Saturn. We’re very grateful the pitbull gods designated Chiron to be our first foster pup. As we write this, he is in standard-procedure quarantine separate from our other dogs. But, he is exceptionally affectionate, gentle, and sweet-spirited with us. He anxiously awaits the day he can meet his foster brother and sister. We’re sure they will fall in love with him.

We continue to admire Jason and his dedicated and enthusiastic staff for their limitless efforts to save the forlorn pitbulls. He leads the rescue with his whole heart, and that attitude permeates the work. We are so glad we found FTTF and have the opportunity to be more involved in the pitbull lovers’ world. We’re volunteers, adopters, and fosters…bring it on! After all, when you fall in love with one pitbull you fall in love with all pitbulls. Even, and especially, the forlorn.